Jenny Wren and Her Borrowed Wings are most positively the Blues; playing the true facts of life expressed in words and song with inspiration, feeling and understanding. The band delivers a jazzed-up bombardment of rootsy musicianship that effortlessly intertwines with their stripped back earthy core. The result; a unique and impassioned sound, laid bare and beautiful in its honesty.

The front woman and double bassist, Jenny Trilsbach, is the modest centrepiece of the band, often found at the back of the stage, it is especially her phenomenal vocals that make this band a special experience. A beautiful and powerful hurricane starts up the moment she begins to sing. Raw and tender, and full of emotion, a delicious rough pearl is nestled between her vocal chords that manages to touch the hearts of the listener.

With their dancing dirt-road guitars, joining Jenny Trilsbach on her powerhouse vocals and heartbeat double bass, are the extremely fine; Ben Fisher, on his butterflonic resophonic guitar, and Ben gallon, on his groove holding, neck throttling acoustic guitar. Playing their instruments with an intuitive togetherness, the interesting sound of this trio wins them more friends and fans with each performance.

Across their four fantastic albums, the band showcase their mesmerising percussion-free acoustic Blues with great song-writing. They create powerful Rhythm and Blues statements that come straight from the heart. Their newest release, When We Were Live, recorded from a concert on their latest tour of Europe, is a live album that captures them at their best, just as they like it, on stage, live, and lively.

2021 Writing and creating new material, alongside a smattering of live performances, the band are getting ready for a bumper year in 2022

2020 The new decade has brought with it some difficult times for us all. The temporary collapse of social contact means no live performances for the foreseeable future. Fear not, however, as Jenny Wren and Her Borrowed Wings have found a way for you to sit back in your old comfy chairs and listen to a live concert without leaving the house. They released their brand new live album, WHEN WE WERE LIVE, full of energy, passion, laughter, tears, whiskey, and the currently rare sound of people gathered together having a great time. The band will be very much looking forward to being live and lively again later on in the year. Fingers crossed!

2019 was a most exciting wheeze for the band, with the release of  their third album THE GIRL ON THE BIKE (are you the girl on the bike?), a UK release tour and then a whoppingly grand 26 date launch tour in Europe in October/November. The band have received great reviews for their new music and are hoping to release a live album recorded on their European tour this October. Onwards to another great year of music making in the new decade.

2018 brought more European travels for the band and the new songs evolved and matured, giving great hopes for the recording of the third album next year.
The band celebrate their 5th anniversary at a special concert at The Green Note in London in October. It was a really magical and atmospheric evening that celebrated many hours of music and oh so many more travelling and experiencing the road together.

2017 was a great year for the band, with a continuing success for the new album,
A SOUP, with mounting glowing reviews, 5 trips to Europe, and the pot of new songs for album number three growing fast.

In 2016 the band recorded and released their second album A SOUP. The intense flavours that make up the thirteen original songs on A SOUP have been matured and carefully refined during the band’s extensive live performances. The band received a great response to their new album and their ongoing live performances.

2015 sent the band further afield again, for several tours and festivals in France, Germany, Switzerland and the Netherlands… The beat goes on!

In 2014 after just a few months of first playing together, Jenny Wren and Her Borrowed Wings were ready to record their debut album DEAD MAN’S HAT. Recorded in April at Abbot Street Studios and released on independent record label Creature Records in May. Featuring eleven original songs that showcase the band’s raw emotional style and intricate musicianship, DEAD MAN’S HAT was well received. The band launched the album in France on a 16 date tour of the Loire Valley, returning home to concerts and festivals across the UK for the remainder of the year.

WHEN WE WERE LIVE

A SOUP – Jenny Wren and Her Borrowed Wings 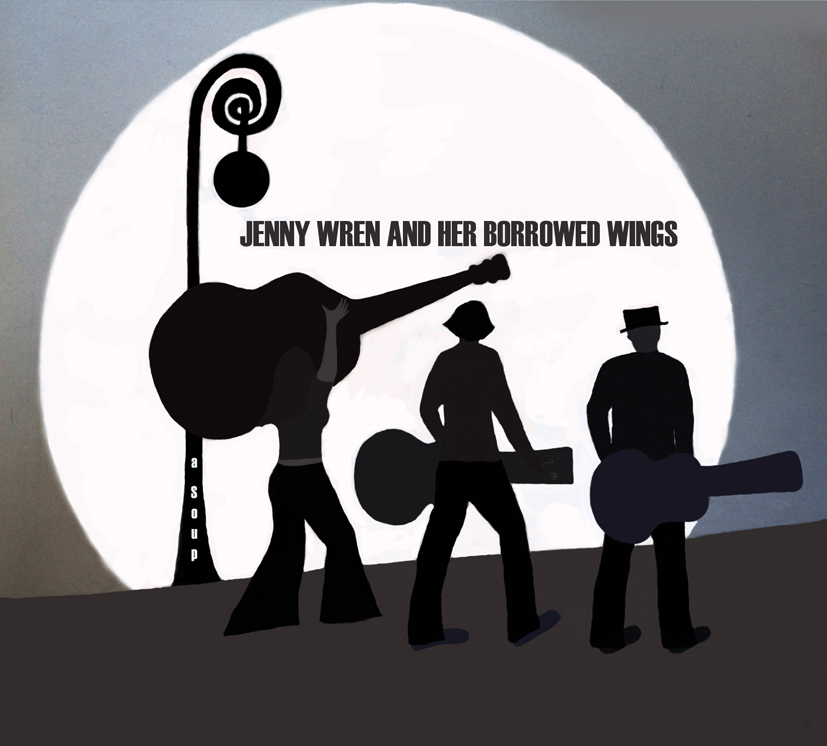 My Tweets
Follow JENNY WREN AND HER BORROWED WINGS on WordPress.com