Real good authentic blues outfits are incredibly difficult to come across these days but Jenny Wren & Her Borrowed Wings are leaders in the field of modern yet vintage R&B. Their style sounds like it could’ve been lifted from a prohibition-era speakeasy with a reputation for powerful vocals and masterly musicianship.

They recently released a brand-new studio album of originals called The Girl on The Bike (Are You the Girl on The Bike?). The album sparked claims that anyone who listened to Jenny’s powerful and raw vocal would instantly fall in love, such is the calibre of her voice. 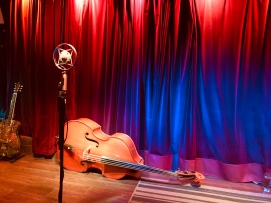 This trio are fast becoming a name throughout the British and European blues circuit and they are here to tell us all about it. Enjoy!

Aldora Britain Records: “Hi Jenny, how are you doing? It’s great to have you involved, I’m a massive fan of your vintage style. This is the first time we have chatted so I was wondering if you could tell us a bit about your music career to date and how you came to be making music with the Borrowed Wings?”

Jenny: “I started playing music in bands when I was about seventeen years old. I have an eclectic taste, so I have played a variety of styles on a variety of instruments; funk, rock, bluegrass, traditional Irish folk music and the blues, amongst others. I wanted to get a bluesy trio together, I approached my old friend, and great player, Ben Fisher (resophonic guitar) and we started mucking around with some ideas. In 2013, whilst playing in a six-piece bluegrass band, I had the pleasure of meeting Ben Gallon (acoustic guitar), another great musician. The three of us had our first rehearsal in October 2013 and almost from the very first beat, Jenny Wren and Her Borrowed Wings was born in earnest. We recorded our first album, Dead Man’s Hat, six months later and started our musical adventures with a sixteen-date tour of France in June 2014.”

Aldora Britain Records: “Your style if firmly rooted in the blues. It has a very retro feel to it, I would say the 40s or even the 30s. What draws you to this era and style of music? What kind of records and artists influenced you?”

Jenny: “We are all fans of blues music, and we describe our band as acoustic rhythm and blues because of the feeling, energy and emotion that it exudes. However, we don’t necessarily think of ourselves as retro at all. There isn’t any attempt to play a particular style or to be

rooted in a specific era. We are influenced by anything that we like the sound of and we are happy to put anything in the music that we can make work with our line-up. Our sparse acoustic instrumentation may be reminiscent of a bygone era but sometimes we are playing country funk!”

Jenny: “I was asked once upon a time if I was the girl on the bike, by a local eccentric. According to our album title, that question remains unanswered.”

Aldora Britain Records: “Can you tell us a bit about the album, how did it all come about?”

Jenny: “The Girl on The Bike (Are You the Girl on The Bike?) is our third album, following our debut with Dead Man’s Hat and then our second, A Soup. We all write songs, and we play live together a lot, and we have just returned from a 26-date tour of Europe. 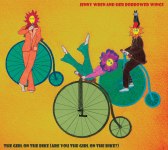 The albums build up from our writing and live performances in a very natural way.”

Aldora Britain Records: “There are a few tracks that stand out for me, one of them is, of course, ‘Cast Out The Snake’, which has already featured on an AB Records compilation, however, I think my favourite may be ‘Balls Mad’. It really sets the record up well. What is this song about, what’s the story behind it?”

Jenny: “We never like to be too explicit about our song meanings, as we prefer to leave a listener’s interpretation up to them. Both of these songs are influenced by our great experiences together whilst travelling and playing music. Sometimes these experiences are marred by an individual or two and we express our dissatisfaction in the songs. There is no denying that there is much pain, honesty and emotion being expressed within our music but, as with the two songs you mentioned, and many others, there is a playfulness and energy about a lot of them too.”

Aldora Britain Records: “What’s up next for you and the Borrowed Wings?”

Jenny: “We are currently working on new material for the fourth album. In the long term, we will just carry on making the music that we love, and enjoying the experience of listening to each other, and hope that more people catch on!”

Jenny: “An impossible question to answer. Jimi Hendrix, BB King, Bob Dylan, Nina Simone, Van Morrison, and so many more… how to choose?” 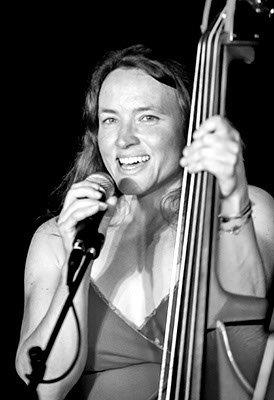 Jenny: “Status Quo, but Ben Gallon’s was Shakin’ Stevens, so he wins that one.

Jenny: “The Twisty Turns but keen observers may consider that cheating.”

Thank you to Tom for featuring us, and for his efforts towards independent new music.
You can download the full issue from Aldora Britain Records here –
https://drive.google.com/file/d/1htnepHyAOKcrENelaEJ6sLbyBQq2Pq6X/view?fbclid=IwAR2Y58PlhU484e_XHb_sKRziGnGYEuGtlzyEpf6tm9h7DVj0hmxsUHeJWWk 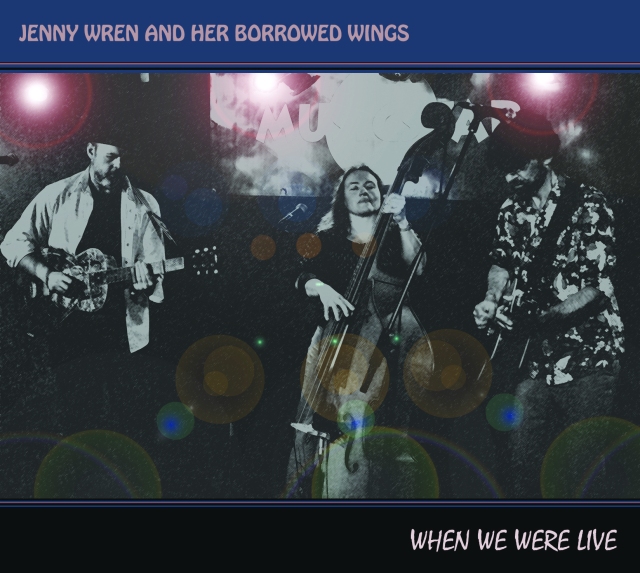 On May the 11th, Jenny Wren and Her Borrowed Wings will be officially releasing a new album, WHEN WE WERE LIVE, recorded live at MusicStar in Norderstedt, Germany, on our recent tour in Europe.
It is full of energy, passion, laughter, tears, whisky, and the currently rare sound of people gathered together having a great time.
Until May the 11th, to remind you of those happy times, to entertain you during these strange times, and perhaps to introduce you to the wonderful sounds of Jenny Wren and Her Borrowed Wings, we will be offering a free download of our new album, WHEN WE WERE LIVE, and recounting our 26 date tour of last Autumn with a day by day account of people, places, travel and great music. Great Times!
Please follow the link, click on BUY DIGITAL ALBUM, and download for free, or for anyone that wants to support our music by way of contribution to our virtual busking hat, choose any amount that you would like to pay. 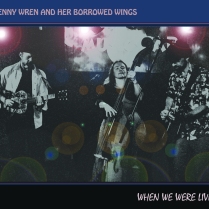 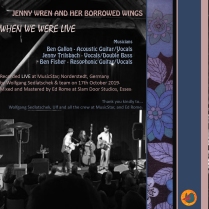 Although we are unable to play live at the moment, and for some time yet it seems, we are working on the very thing that you can enjoy from your own nests, and we are very excited about it. More details coming soon…

In the meantime, if you would like to support three original music makers and performers through the hard times, and acquire some new original and heartfelt music, played with oomph and passion, just like at a live show, you can purchase our entire discography of 3 albums here. Currently available for a 20% discount for downloads.

Thank you, we are looking forward to being live and lively, as soon as we are able.

Dear friends, it is hard to say the right things in these difficult and strange times. With so many fellow humans falling ill in such a serious way, it can seem trite to talk about the individual struggle of performing artists and the difficult time that it is for the music industry.
With that in mind, in a very quiet and gentle way, we would like to say thank you to the fine people at Bandcamp for waiving their revenue share of all music bought on their platform until midnight tonight (20/03).

If you are stuck at home and would like some new music to entertain you or a friend, you can support us through these uncertain times by buying Jenny Wren and Her Borrowed Wings‘ music on Bandcamp. We have three albums full of heartfelt original music for your listening pleasure, and we hope to whisk you away on a musical journey, to soothe your soul and distract your mind.
We would like to thank you all for your support thus far, and we look forward to being back on stage, live and lively very soon.
Please visit our music page on Bandcamp to liven up your music collection –
https://jennywrenandherborrowedwings.bandcamp.com/

Jenny Wren & Her Borrowed Wings take it back to the 40s and even the prohibition era with some good time, old time Blues on their long player, The Girl on The Bike (Are You the Girl on The Bike?). The album opens with ‘Balls M

ad’, a Bluesy shuffler that really sets the tone. You could almost picture this song being performed in the speakeasies and establishments of ill repute throughout the prohibition era. ‘Showtime’ and ‘The Dirty Disease’ are further powerful R&B statements from this English combo. They showcase the prowess of the Borrowed Wings as they perform acoustic instruments with great proficiency and rhythm, a Blues masterclass. ‘So Much More’ brings the lowdown bass and adds a hard edge and grit to proceedings and ‘Cast Out the Snake’ provides one of the highlights of the record with a jazzed-up bombardment of rootsy musicianship – exceptional. The title track is a seductively charming laid-back number and ‘Hard Blues’ conveys a hard time, bad luck story through sheer Blues balladry.
The album winds down with more Americana Blues in ‘Devil’s Paw’, ‘I’m Gone’, and ’44 Years’. The closing number is the countrified ‘Get Where It Goes’ which provides one final touching moment on the record which is a real highlight to see us out.

Thanks Aldora Britain Records – AB Records for the review and including us in this month’s issue.

For your listening pleasure you can purchase your very own copy of The Girl On The Bike (are you the girl on the bike?) right here…
https://jennywrenandherborrowedwings.bandcamp.com/

Looking forward to playing in Tunbridge Wells tonight for the Blues With Bottle Club, at the Toad Rock Retreat. 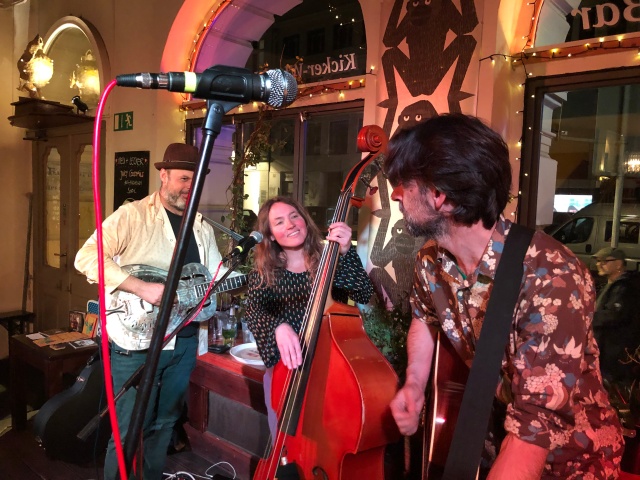 Jenny Wren and Her Borrowed Wings make a rare local(ish) performance this month, playing our acoustic Rhythm and Blues for the fine people at The Sail Loft Folk Club in Horndon on the Hill.
We are coming out of hibernation to shake of the wintry cobwebs with a bluesy bang, can’t wait!

On Tuesday 25th February Jenny Wren and Her Borrowed Wings will be playing at the Blues With Bottle Club, held at Toad Rock Retreat in Royal Tunbridge Wells.
It will be our first time visiting this club, we are looking forward to it.
www.blueswithbottleclub.co.uk/

Wishing a very merry Christmas to one and all!

Come and join us in London for the final Jenny Wren and Her Borrowed Wings performance of what has been a very exciting and eventful 2019.

WHEN WE WERE LIVE 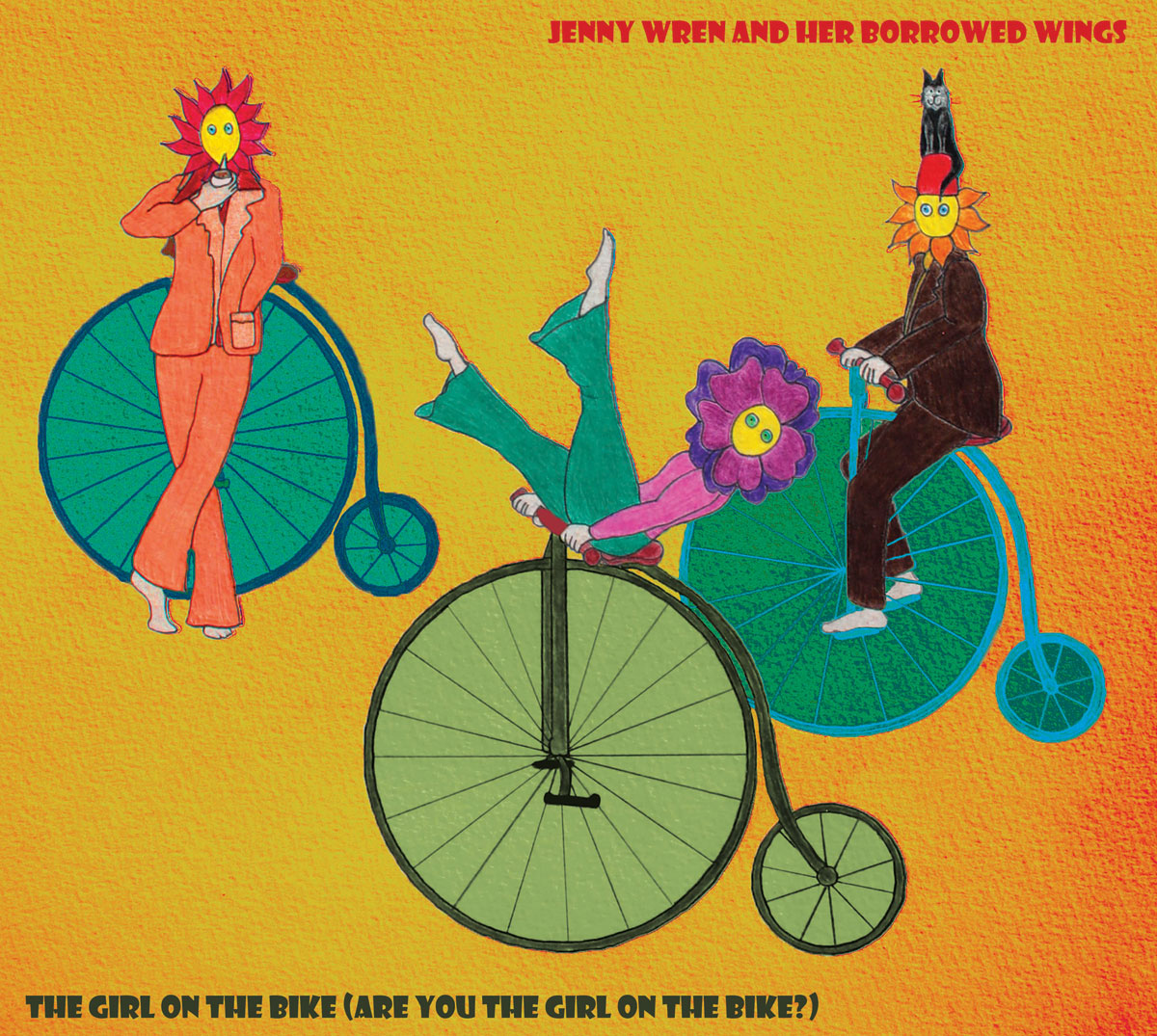 A SOUP – Jenny Wren and Her Borrowed Wings

My Tweets
Follow JENNY WREN AND HER BORROWED WINGS on WordPress.com